Update- first ever Instalanche!  Thanks, Glenn.

I was at the April 15th Tea Party in Colorado Springs in Acacia Park. We had a great time. A friend of mine, Rick Carducci, came with me, and we met up with my mom and dad at the rally too.

We were there at about 10:30 and the rally officially began at 11. I am not confident of my ability to estimate numbers, but several people said they thought there were in excess of a thousand people there and that seems right to me. We heard from a few candidates- Ken Buck and Dan Maes were there and gave great speeches.

I was actively on the lookout for any racism or anything like that, and saw none of it.  I was kind of hoping there was some, so I could take his picture and out him as a Tea Party crasher, but there wasn’t any at all to be seen.  There was a little bit of birtherism which I don’t think is particularly productive, but I can’t blame people for wondering.

My favorite part of the rally though were conversations I had with a number of high school students that had been brought by their teacher to observe the rally. They were all predictably liberal, opposed to the Tea Party and in favor of Obamacare. I was able to engage a few of them in conversation, to try to show them what our concerns were. Who knows how successful it was, but it was fun nonetheless. 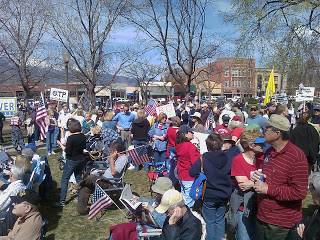 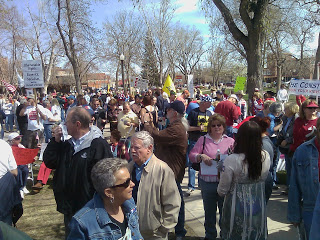