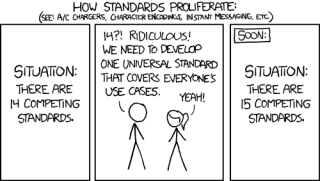 I was at a discussion tonight regarding different religions, where similarities and differences between the leading figures of Judaism, Islam and Christianity and the way that each religions dealt with these figures.  The speaker tried to show the way that founding religious leaders sometimes are mythologized, and the similar way the different religions did that.  It was fairly standard relativistic stuff, but the speaker at the same time did make a pretty good attempt to talk truly about each of these religions and the real differences that exist.  One lady in the audience asked why we focus so much on the differences.  She said, “It’s like we don’t really want peace.”  The speaker answered somewhat inconclusively.

After the talk was over, the lady came up to me and my friend that was with me and in response to some things my friend had said about the illusion of neutrality, that everyone was coming from a particular perspective, made some comments about being a lot more sure of what she knew when she was younger than she did now that she was seventy.  Then she said that we should check out the Unitarian church.

This made me think of the above comic, a perceptive look at what often happens when we try to simplify.  The person who says that we all ought to join together with other religions and simply focus on what unites us rather than what divides us is actually creating a new religion and asking all of us to leave our old faiths and join this new one.  The Unitarian lady was actually proselytizing, that which she so deplored when other religions engaged in it.  She just proved my friend right- she was pretending to be saying, “It’s dumb to fight over these things.  Let’s just forget what divides us and all just agree to get along.”  But what she was actually saying is, “My religion is right and yours are all wrong, and you should join my church.”  I don’t blame her.  That’s what I think too.  But it would be nice if we’d all just be up front about it.